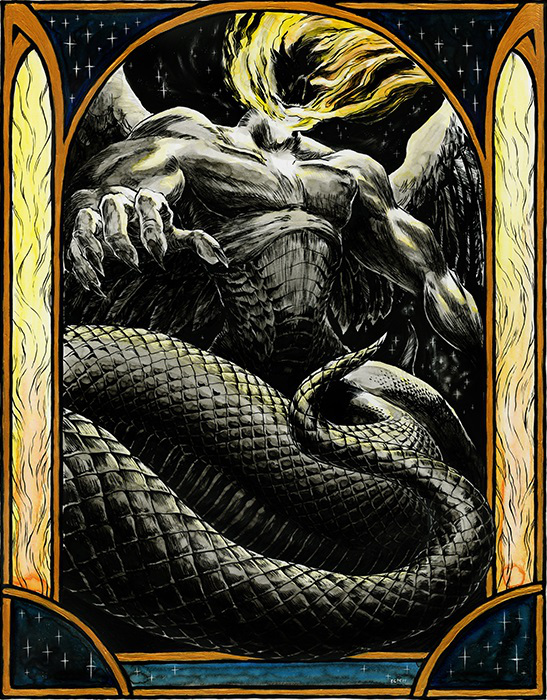 “We must let go of the life we planned, so as to accept the one that is waiting for us.” Joseph Campbell

…The King then decided to find his ugly snake son a bride and get him married so his golden haired son could get married and inherit the kingdom. So he looked all around his kingdom for a suitable bride. He put an ad in the classifieds saying, “Single, slithery snake seeking life-long partner, not very good table manners and too many other bad habits to mention.” You’d be surprised how many takers there were. Passive women come out in droves. Some women love snakes it seems, especially the tall, dark and handsome, wounded ones, with lots of intensity and potential.

A beautiful bride was selected and they had a wedding, and on the wedding night the snake ate his bride. Why? Because she was so poorly mothered that she didn’t know what to do. She passively gave in to the snake’s demands.

The King ran another ad and an unbelievable number responded, and there was a wedding, and again the snake ate his bride on the wedding night. And so it went with the third, fourth and fifth. The women of the kingdom began hearing about the snake’s taste in women and they were getting a little harder to find.

However, there was a woodcutter’s daughter who was extremely in touch with her own emotions, and anything but passive, decided to go for it. Unlike her predecessors she went to find The Wise Old Woman, which in fairy stories is code for “Good Mother.” She lived in the woods – the same one who helped the Queen get pregnant – and asked her for advice. She gladly gave it but insisted that, unlike the Queen, she must follow her instructions to the letter or she could also become snake food like.

The Old Wise Woman told her to take her time and not rush into anything. The old woman told her to make seven beautiful wedding blouses (code for activeness and creativity) and wear them on her wedding night, and to take a bucket of sweet milk and a steel brush with her to the bedroom.

So she took about a year making these blouses. Waiting makes impatient snakes hungry. Finally, on the wedding night the snake closed the door and was ready to have some wife food. But first he wanted a little pre-dinner show so he said, “Take off your blouse.”

“I’ll take off my blouse if you will take off one of your skins,” she replied.

“Do what? You got to be kidding. That would hurt like hell. Besides, no one has ever asked me to do this before.” So due to his hidden desire for real love he began taking off his skin and you should have heard the shrieks, cries and yelling. You know it hurts to shed a skin. It also hurts to learn how to love. This snake had a lot to learn about how poorly he had loved in the past.

The woodcutter’s daughter took off the blouse only to reveal another one under it. The snake looked perplexed and was beginning to get a little frustrated.

“Take off the blouse,” He growled.

“I can’t believe you’re asking me to do all this stuff. Every woman I’ve eaten, I mean, loved has never asked me to do this before. What do you want from me? Emotional honesty, availability? What next? I suppose you want me to open up and tell you what I really feel?”

So once again you should have heard the moaning and groaning of the snake shedding another layer of skin. The woman removed a blouse only to reveal another one. Well the snake was getting pretty irritated to say the least and was beginning to get the picture that this woman was not going to be as easy as the other brides, and that she knew how to take care of herself and ask for what she wanted and wouldn’t settle for anything less than what she deserved.

How many times have we all settled for less than we truly wanted or even deserved?

Well to make an already long story short, this went on for seven times until finally there was nothing left of the snake except a little puddle of a former self lying on the floor.

That’s what grieving and learning to really love will do to a snake or a man – reduce him to nothing and show him he knows nothing about mature relationships.

The bride took her bucket of sweet milk out from under the bed and dipped her steel brush into it and scrubbed what remained of the snake for about an hour or so. She loved him well. She prepared herself to love him well, and in so doing, prepared herself to be well loved.

The next morning the wedding chamber doors opened and out stepped a beautiful, stunning, Prince with his smart, respected bride, and they got the family together and had a great feast and lived happily ever after.

The snake didn’t know the previous women he married and then ate. Carl Jung referred to these women as the “False Brides.” The “True Bride” is the maiden with the seven blouses who took her time, who took care of herself, had great boundaries, and knew her limits, and demanded that the Snake/man mourn his losses, and that way he would truly know himself and her. The snake thought that he was simply a giant snake but there was so much more to him, and while the bride to be knew this, she was prudent and patient enough with him so that he found out just who his true self really was.